You A Chicken For REEAL

If you were to walk by our house, you’d probably hear children singing “How Far I Go,” from Moana in very loud, (and nasally) voices. “When the sky from the light from the sky meets the sea, it calls me! Now I KNOOOOWW how far it GOOOOOs!” Nora and Rosie are obsessed with this movie, (and they’ve only seen it once), to the point that I decided we had to cool it with the soundtrack to give their brains a break. It was the ONLY thing Rosie talked about for awhile. She really hasn’t watched THAT much TV– okay more than what I let Nora watch at this age. Poor second child. She just absorbs TV unlike anything else. She started telling random kids on the playground, “We watched Moana and it was scaahwy. Moana and uuuummm Heihei  and uuuummm Maui is funny. Um. I’m Moana of Motunu and you will board my boat.” She told Kevin, “I’m Moana and you Heihei the CHICKen.” He said, “I’m not a chicken!” And she said, “But. You Heihei the CHICKen Foh Reeeal.”

She’s pretty good at zingers without even meaning to be. For awhile, she’d call us Sven the reindeer from Frozen. “Mommy, you Sben! I Anna and Nora Elsa and you Sben.”

Also, she said to Kevin, after I’d asked everyone if they’d rather be a cow or a horse (by the way, he said cow if it was a bull). “No, Daddy,” Rosie said. “You a DONKEY.” Zing! What’s with her and calling people not-so-glamorous animals?

Rosie is a chatter box now. She opens her eyes after a nap and immediately starts chatting as if she was not asleep for the last two hours, but in the middle of a thought. The way she talks is so funny to me. She sounds like a voice navigation system. The words are real person words, but her inflection is not quite right and often ends with a question when it shouldn’t, i.e. “AYE love YOU so MUCH?”

She’s started to really think about things the way Nora does. She watched an episode of Super Why with Nora (again with the TV. Sheesh. I’m ashamed!) The episode was about Little Red Riding Hood. That night, I was rocking Rosie and she kept asking, “Is da woof gramma?” “Well,” I said. “It’s complicated. Not exactly.” She was not satisfied. “Mommy, is da woof gramma?” She asked me over and over and over again. “There’s a whole story about it,” I said. “You see, there was this girl named little red…” She lifted her head from my shoulder, put her hands on my cheeks and turned my face toward her face. We were nose to nose. “Mommy,” she said.  “Look at me. I TALKING to you. Is the woof gramma?” “No,” I said, finally. “No, it’s not.” I tried to get her to relax and rest her head on my shoulder, and she started whispering to me. “Mommy is the woof gramma? Mommy is the woof gramma?”

Nora and Rosie are doing just what sisters are supposed to do. They play together, wrestle with each other, scream at each other, fight with one another, turn on us and get into trouble together and love each other in an almost primal way. It’s cool that they can play together now. The game of choice right now is called “sick baby.” Often, I find Rosie sitting in (I mean, dwarfing) a bouncy chair or doll’s stroller while Nora checks her heartbeat with her stethoscope or puts a blanket over her and tells her she needs to rest. “Don’t get up, Baby,” Nora says. “You need your rest.” Rosie says, “My rest? Okay, Momma.” They also like to put on backpacks, rainboots and our jackets and play a game Rosie likes to call, “I’m going at school.”

I can’t keep up with the rapidly shifting love/fight dynamic between these two, and often it’s best for me not to jump in too quickly. I might hear screaming and run into the room to find them both yanking on a toy. I’m just about to intervene when the screaming turns into laughter and then the two of them are chasing each other around the room, in hysterics.

Nora says she loves Rosie just a little bit more than she loves me and Daddy. But that she loves us all a lot. It’s cool. They’ll have a bond that no one can match, and they should. Their relationship will be theirs and only theirs, and that’s what I would hope for them. 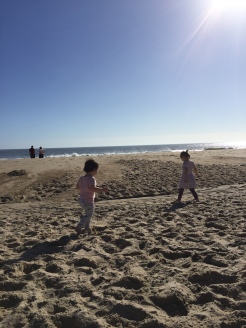 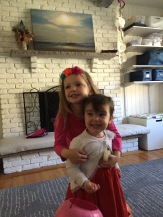 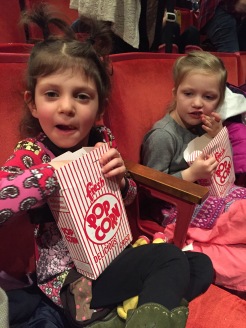 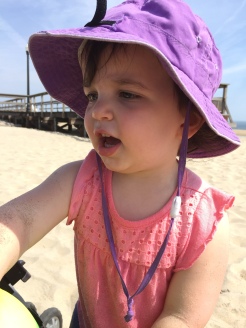 PS- I’ve been really bad about updating so I’m going to add a few little funny things Rosie used to do. She’d would start walking backwards and yell “Backwards!” and bump into stuff. Or, she’d put her hands over her eyes and walk around like that and fall all over the place. Also, for awhile she investigated putting food up her nose. She did this with a very serious expression. She put stuff in her ears too. Glad those phases are over. (Knock on wood.)