Nora wakes up from her nap with her perpetual bed head and asks, “Is it good morning time?” or sometimes, “is it dark outside?”

She tells us stories: “It’s a story about once upon a time and a little girl went to a party and said I love you!”

Her favorite cereal is Special K, which is funny to me. It’s like she’s a fifty year old woman.

We went to the Nyack Halloween parade and the fire trucks were very loud and made her upset.

She processed what happened over and over after the fact and told anyone who would listen: “The fire trucks were too noisy and, uh, I was crying and, uh, I was sad but then the music started and I was, uh, happy already though.”

Nora can at times be easily distracted. The other day I said it was time to leave the playground and she was hysterical because of, you know, the injustice. She did the limp ragdoll body thing (so clever!) “Look at the birds,” I said. She laughed, elated suddenly, her face still tear-stained. “Yeah you made me happy and the birds are coming too!”

When she is elated she’ll let you know. She climbs up the stairs of the playground and says, “I’m so happy right now!”

She’s sweet: Every time I cough or sneeze she gives me a hug and rubs my back. “I made you happy!”

Kevin bumps his head getting her out of the car. She rubs his shoulder. “I’m sorry you bumped your head,” she says. “It’ll be okay.”

She often answers questions by saying, “Oh, well sure,” but often does not do the thing you’re asking because she’s very busy.

“Will you draw me a picture of a camel?” I ask.

“A camel? Oh well, sure. But first I better erase this.”

“Will you tell me a story?”

“Oh well, sure, but right now I’m sleepy and I better rest.”

“Do you like steak?”
“Steak? Well I dooon’t. But I’ll try!”
She sits on the couch and says she wants to watch Daniel Tiger. “Let’s play,” I say, putting a puzzle together by myself.

“Well, I’m stuffy so I better rest,” she says.
Her logic sometimes makes me laugh:

“Can you draw stars?”

“Why are you sad?”
“Because Caitlin and Leah won’t come to school with me tomorrow.”
Other funny/random things she’s said:

“We see a reindeer but it’s not raining!”
“When I was little, my grandmother made me a house and it was out of blocks.”
“This is a bear cave. You’re going to be a bear and I’m going to be scared.”
She still likes to sing, constantly narrating what she’s doing. She’s got a few classics such as “eat your cereal,” “figure it out,” “red blue green and yellow,” and “yummy yummy yummy.”

We did a three day potty training boot camp, which meant we didn’t go anywhere for three days and let her run around in underwear and pee all over the house. She did really well! She had accidents every half hour the first morning, and then none after that. Now she wears underwear during waking hours. She’s not yet at the point that she tells us when she has to go and she’s often reluctant to sit on the potty because she’s very busy playing. But once she starts peeing, she gets this giant grin. She’s had a few accidents here and there, but she’s doing really great! I have to admit, though it’s the right move for right now, it’s bitter sweet for me that she’s out of diapers. Our little Shmooples is growing up! 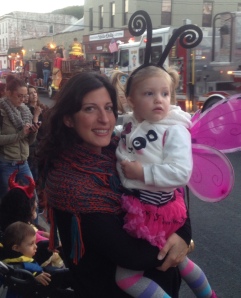 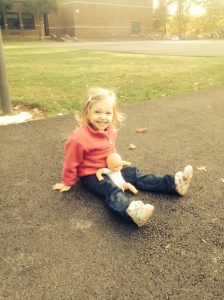 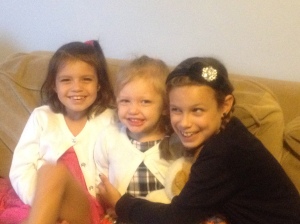