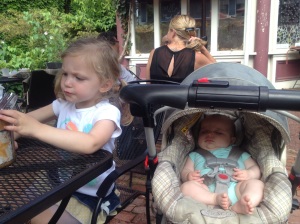 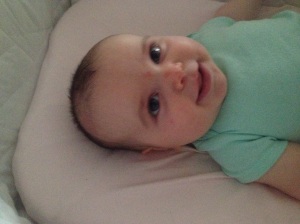 Nora is not only a big sister now — she is becoming a big girl. She’s learning to do a lot of things on her own — going potty, putting her clothes on and taking them off, climbing in and out of the car, riding a scooter and more and more. This is exciting for all of us, and yet, there are also some growing pains that come along with independence and separation. She likes things the way she likes them. (Know of any other strong-willed folks in this family?… Ahem.) When I tell her it’s 93 degrees and so fleece pants might not be the best choice for today, she doesn’t want to hear it. “But these are my pony pants. Because I’m a pony!” It’s an interesting age because she’s somewhere between being a toddler and an independent kid — she’s not quite able to do all of these things on her own and still needs assistance. But we don’t do things the way she’d like to do them on her own. She likes to set up the couch a certain way before watching TV and if someone sits on the wrong pillow, she gets upset. She likes to wear a multi-colored jelly shoe on one foot and a purple flip-flop that is a size too small on the other foot. She’s not ointerested in logic — that those shoes won’t be too comfortable on the playground. She likes to pour orange juice into her yogurt and when we tell her not to play with her food, she says, “But these are the baby birds and that is their mommy!” which is a hard point to argue. She wants the cupcake underpants not the blue ones! So, there’s a lot of push and pull, but ultimately, we’re so proud of her for being just who she is and for trying new things and being brave.

She is also hilarious. She says to me from the backseat of the car with a lot of emphasis on each word, “Mommy? I… like… too… much… ice cream!”

When Daddy tried on new glasses and asked her what she thought, she said, “Daddy, you look pretty. Weird!”

Rosie is a mush. She’s in the 98th percentile for height and weight and has the cutest little chubby rolls. She has started to smile and make cute little noises that come from the back of her throat. She coos when we sing to her. So far,  her favorite artists are The Beatles, Adele and The Muppets. She is so laid back and such a sweetie!