How can that be? A year ago today, I was preparing to head to the hospital to get induced. I felt a whole mix of emotions. I was relieved to know when she’d make her appearance. She was over a week late, and the anticipation was getting to me, especially since there had been one snow storm after the other and I was worried my parents wouldn’t be able to get here to watch Nora when the time came. I was also anxious about getting induced. It felt strange to choose the date of her birth. She was nice and cozy in there. I didn’t want to force her to come out sooner than she was ready. I just wanted to know that she would be okay, a healthy baby. And, I was in tears as we drove away from the house that night (a year ago, tonight), watching 3-year-old Nora waving at me from the window. She didn’t know how life would change, that she would no longer be top dog all day long. I knew she’d be so happy throughout her lifetime to have a sister and a friend in the world, but I also knew how she was about to face the biggest adjustment she’d had to deal with to date, sharing Mommy and Daddy with another little being.

I couldn’t sleep that night in the hospital with all of these nerves and emotions. It didn’t help that I was hugely pregnant and having contractions, trying to sleep on a reclining chair, hooked up to a fetal monitor, Kevin curled up on a cot beside me.

The next morning, I woke up feeling anxious but also ready to go. They hooked me up to the pitocin at noon, and she was born at 2:56, less than three hours later. It was an extremely fast labor, and before I knew it, I was holding a beautiful, healthy baby in my arms.

What a blessing to have her in our lives. Rosie is the sweetest, happiest baby in the world. You only have to look in her direction and she lets out a belly laugh.

Her favorite thing to do is watch Nora and try to do what she’s doing. If Nora is coloring, Rosie is standing right beside her, trying to grab the crayons, knocking the whole box onto the floor. Nora makes Rosie laugh more than anyone. And Nora loves Rosie so incredibly much. Sometimes, Nora hugs and squeezes her a little too hard, and sometimes, she doesn’t want to share her prized possessions, but she also looks out for her baby sister, rubbing her head if she’s sad, playing peekaboo with her, saying “Aw, I love you, Rosie,” in a very sweet baby voice.

Rosie’s first word/noise was “woof” and “bbbhh” (an elephant noise). She points to pictures of animals and makes these noises, no matter what sort of animal it is. She also says “rrrrr” when she sees a bear or tiger. Her first (and only) word is Mama, but by that, she means baby. It’s funny because one of Nora’s first words was Dada, and by that, she meant baby too. Rosie loves to hug her baby doll, say “Mama” and give the baby a hug and a pat. She gives kisses too, but not on command.

This morning, I think she started calling me Mama for the first time. I had just put her down for a nap and I could see her in the monitor, standing at the edge of her crib. “Mama. Mama. Mama.” That’s it, it’s over, I thought. She’s got me wrapped around her little finger. I went back upstairs to rock her.

She does “all gone,” and “so big,” with hand motions. She can pull herself up to stand when holding on to things. She crawls very vigorously and with sound effects. Nora and Rosie like to “chase” each other. She has two teeth on top and four on the bottom. Around 8 months, that one rogue tooth came in on the bottom left side, and then around 10 months, they started to fill in every other tooth like a jack o’ lantern.

She warms my heart– the little noises she makes when she points at things, the smiles she gives me, the softness of her fuzzy little head.

I’m so grateful for my two girls. They give us so much joy. Happy first birthday, sweet little Rosie!!!

Here are some pics from our little winter trip to the beach: 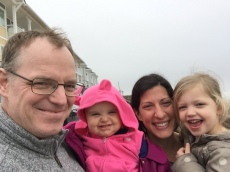 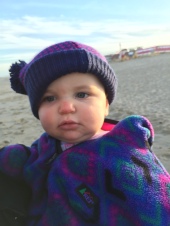 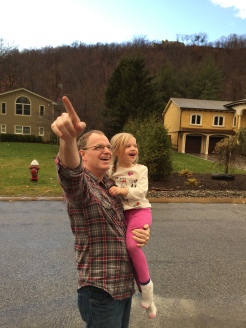 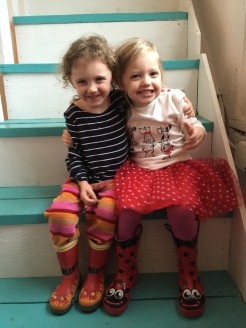 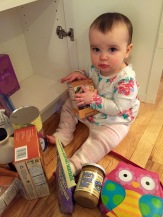 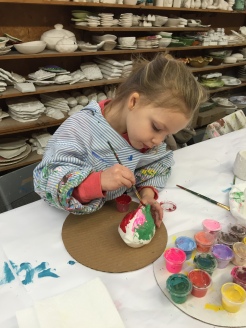