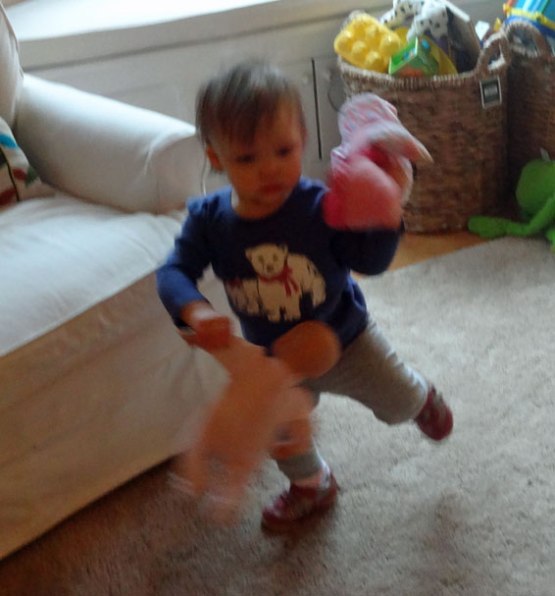 Nora points at herself in the mirror and says, “Dada!” She says Dada when she sees a picture of herself, a picture of a baby on the side of the diaper box or baby food jar. She stumbles around, holding two Dadas in each hand and repeats “Dada dada dada dada” over and over again. (By the way, she walks now. Can’t believe I haven’t posted about that yet!) She points and says Dada with such an earnest expression each time, waiting for my response, as if this is really something she needed to get off her chest.

On an airplane ride back from Florida, Nora spent the trip peering over the seat behind us to point at a boy. “Dada!” she said in a squeal. “Dada!”

“I think you have the wrong person,” the boy said, a little embarrassed.

This week, we took a little trip to the library and the librarians were cooing at Nora. A fifty-ish man told Nora she was going to be a heart breaker. “She’s a beautiful baby,” he said. Nora pointed at him (technically behind him at a little kid) and said, “Dada.”

The man’s eyes widened. “Oh, no I’m not your Dada” he said, as if she were implying, “Thank you for the compliment. You are my father now.”

My husband says it’s confusing when he hears her saying “Dada dada dada” from her crib in the morning, because in his sleepy state, he thinks she’s calling out for him. When he goes in to check on her, she’s reaching over the crib to the baby doll which has taken a plunge.

She knows who her father is, though. She just doesn’t call him Dada quite yet. But he’s in the club. How do I know? Because she puts a hand on his chest, gazes up at him and tells him, in her little voice, “Mama.”